Repairing Roads Due to Weather

Much of the work performed by the Coon Rapids Streets Division involves direct maintenance to the city's asphalt surfaced roadways. Minnesota's harsh northern climate is abusive to less traveled neighborhood streets with a relentless cycle of freezing and thawing. 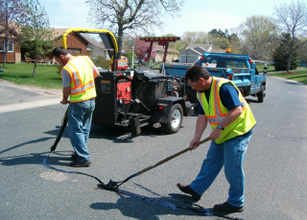 Many roads which bear a higher traffic load need more frequent care and repairs. As a result, throughout the spring, summer, and fall the Streets Division crews can be found filling and patching potholes, sealing cracks in street pavement, and repaving larger areas of roadways in need of repair.

Seal coating is an asphalt cement usually emulsified (suspended in water) to allow for it to be applied without the addition of extreme heat. It is sprayed on the road surface, followed by the placement of small aggregate ("chips"). The chips are then compacted to orient the chips for maximum adherence to the asphalt, and excess stone is swept from the surface. This protects the pavement from the effects of sun and water, increases skid resistance, fills small cracks and other surface defects.

Benefits of a seal coat

The primary reason to seal coat an asphalt pavement is to protect the pavement surface from two of the most destructive natural elements - sun and water. When an asphalt pavement is exposed to sun, wind and water, the asphalt hardens, or oxidizes. This causes the pavement to become more brittle. As a result, the pavement will crack because it is unable to bend and flex when exposed to traffic and temperature changes. Sealcoating provides a waterproof membrane which slows down the oxidation process and helps the pavement shed water as well as preventing it from entering the base material.

A secondary benefit of seal coating is an increase in the surface friction it provides. This is accomplished by the aggregates added to the pavement surface. Sealcoating is about one fourth to one fifth the cost of a conventional asphalt overlay and extends the life of asphalt pavement by 5 to 7 years, which varies with the type and amount of daily traffic.

Fog Sealing - What is it?

A fog seal is an application of diluted asphalt emulsion without a cover aggregate “chips”, used to seal and enrich the asphalt pavement surface, seal minor cracks and prevent raveling. An asphalt distributor is normally used to apply the fog seal.

Benefits of a fog seal

Fog sealing has very similar benefits to a seal coat. The purpose of a fog seal is to protect the pavement surface from the deteriorating effects of sun and water. Fog sealing provides a waterproof membrane which slows down the oxidation process and helps the pavement shed water, preventing it from entering the base material. It also provides a clean black surface to aid in snow and ice melting.

The City is using fog sealing in cul-de-sacs to minimize historical problems associated with high volumes of turning movements. During the warmer summer months the seal coat area has a tendency to shift or tear when turning movements occur.  Garbage and recycling trucks with their large tandem base can often create these issues along with cars backing out of there driveway and turning their wheels while not moving.

Watch this Video to Learn More

What does seal coating and fog sealing look like in your neighborhood? Find out how the process works.